The Politics of Ass 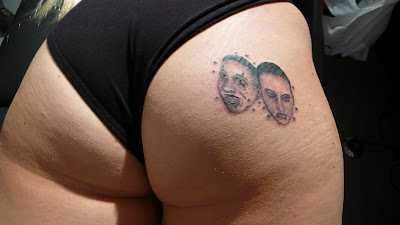 In Mexico it is impossible to ignore the escalating violence of the ‘War on Drugs’ and the symbolic and often flamboyant forms of death in public view. Along the border a generation of los ni nis – disillusioned youth who neither work nor study[1] – are being lured into narco organisations, sometimes by force, to partake in these cruel practices.

In a country that has a well-established culture of death, such displays inform a unique popular dialogue. The true crime blog ‘el Blog del Narco’[2] emerged in 2010 as a response to an unprecedented media ban on often charismatic narco content. After the murders of several journalists reporting on narco activities, these anonymous bloggers could make ambiguous claims and draw international notoriety for showing stories from the front lines of the drug war that no one else dared to. Simultaneously, a generation of narco youth raised on social media began courting celebrity by posting the dispatches, threats and trophy videos that drive an emerging trend of watching real deaths online – a nefarious spin on prosumer net culture.

Recently I became fixated on the teens Gabriel Cardona and Rosalio Reta, american citizens from Laredo, Texas, who had fallen in with the ruthless crime organisation, Los Zetas. The childhood friends were trained as sicarios (hitmen) and would kill across both sides of the border, earning as much as $10,000 per hit plus perks such as kilos of cocaine, sports cars and women. Cardona and Reta were arrested in a sequence of dramatic events following a police sting at a safe house in Texas. Whilst awaiting trial Cardona had a fellow inmate tattoo two wide-open eyes on his closed eyelids, and Reta had his face tattooed with the markings of a jester. They are now serving multiple life sentences.

Earlier this year I released a proposition in Mexico hoping to provoke a discussion about the popular dynamics of narco culture and chase up on rumours of drug money being laundered through the art world. To my surprise, a prominent young art collector named Andréa Quiñones–Armería responded to my call and we met soon after to discuss the implications of the piece. The next day we approached a tattoo artist, before hastily arranging a date with Yautepec, an enterprising gallery in Mexico City. Four days after our first meeting Andréa had the faces of Cardona and Reta, who had their faces tattooed in prison, in turn tattooed on her ass.

Located along a busy thoroughfare and framed within the floor-to-ceiling gallery windows, the performance played out as a raucous, near spontaneous event in full view of the public, as well as being streamed live online and Tweeted. The act I proposed, a tongue-in-cheek acknowledgement of narco teen power by literally ‘giving it the arse’, was transformed by Andréa whose social standing laced it with feminism and class subversion. In Latin America the word is ‘ass’ and – as Andréa’s partner made clear to me mid-tattoo – a woman’s ass in particular is a trigger for desire. Now permanently inked with two very distinct faces of narco terror, Andréa also bears some of that strange power.