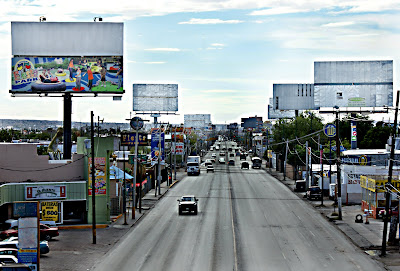 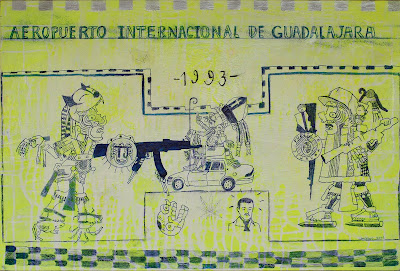 Billboards and hoardings stand large and empty over Ciduad Juarez – advertising nothing – a testament to NAFTA’s empty promise of prosperity.

Painting and photograph face off. Terminal points transmit a field of forces that oscillate, attract/repel. A re-presentation that allows one to perceive at once the socio-political processes (colonialism, capitalism, postmodernization, globalization) that manifest as the maquiladoras-theme parks-yonkes-check points-dental clinics-discount chemists-red-light-districts that signal the trash strewn limits of the first world.

Times change. Bodies once caught within the gears of industry (and once sacrificed to cosmic machinery) are superseded by more flexible forms of info-techno-capital that self organize, reproduce, work and expend. Biopolitical forces conditioned within a climate of semiocapitalism propel the processes of life (and death) along the border.

Too old for Juarez, too young for America. Los Ni Nis—Generation Free Trade—got wise to the fact that the fast cash from the dirty work in the drug trade is the only way to make any sense of their short lives. Homicidal and suicidal foot soldiers in a war already absorbed into the everyday.

Una mujer decapita a un integrante de Los Zetas is a grizzly YouTube artefact of an act that quite literally attempts to unmask the state, and predictably reveals no villain nor any great conspiracy. Captured-tortured-decapitated-broken- blogged-tagged-Tweeted – desensitized poor players are caught in a self-perpetuating game of impunity. Echoes of pre-Colombian mythology in recent history suggests an ancient order or blue print of the present in the past, but what is the use of such a meta-narrative? What is so good about such an underlying truth? Why bother with meaning at all?

“I answer tentatively that I think there is a correlation between the causelessness of Mexico's war and the savagery. The cruelty is in and of the nihilism, the greed for violence reflects the greed for brands, and becomes a brand in itself.” [1]

Billboards and hoardings stand large and empty over Ciduad Juarez – advertising emptied of its symbolic meaning – promise nothing, but belie a significant philosophical shift. As a relic of the future, they hint at a time to come once liberated from the repetition of myth and unbound from the insistence of history.

[1] Vulliamy, Ed. “Ciudad Juarez is all our futures. This is the inevitable war of capitalism gone mad.” guardian.co.uk, 20 June 2011.