Planking: A post-political dilemma of life in excess 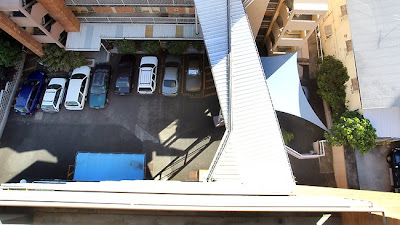 “The rules of the lying down game are simple: lie face down, with palms touching your sides and toes touching the ground, get someone to take a picture of you and post it on the internet.”[1]

On May 16 2011, Acton Beale plunged to his death while attempting to plank from the balcony rail of his seventh floor Brisbane unit. Was this an act of bravado gone wrong, or was Beale acting on a desire to become one with the objet petit a central to the middle class condition – an obsession with ­real estate and the prize of home ownership? By collapsing his life into art, might Beale’s act belie a subconscious desire for death?

Let’s consider this short-lived copycat craze indigenous to Facebook culture as a real world actualisation of socially mediated identities. The smartphone-enabled recursion of ‘plank and post’ reflects the current epoch’s seamless integration of the personal with the post-political, (re)producing meme-like unfunctionality across the commodified, socially mediated circuits that prescribe contemporary subjectivities.

As a reductive performative gesture, planking recalls Minimalism’s foregrounding of forms and their relationship with the spaces they inhabit. Planking’s collapse of life into art parallels Minimalism’s collapse of content into form – unfunction as perfection.
Planking also sits contemporaneously amongst relational and social art practices, extending the genealogy of psychogeography and urban play. As with dérive, skateboarding, BASE jumping and parkour, planking displays an urge to rub against the grain of bureaucratised and commercialised space.

Free market capitalism imagines an order external to the human condition – a metaphysical supra-intelligence – as an objective, non-human and therefore rational ordering of life. Necro-economics extends this logic to conclude that, given certain conditions, people will surrender their lives in order to maintain market equilibrium.[3]

As a surplus of affective labour, might the art of planking indicate zones of excess life that could potentially destabilise the free market? Do plankers risk life by acting on a subconscious death drive return to an inorganic state? Did Acton Beale realise his post-(necro)political subjectivity by exposing himself to death?

Planking reveals the play of subliminal and necro-economic forces on the post-political subject engaged in symbolic surface interaction. As such, we might observe planking as a psychogeographic symptom of a contagious affective disorder of surplus labour with the potential to destabilise the equilibrium of the metaphysical free market, thus requiring regulation by death. Ergo, death by planking could be seen as the ultimate un-funk-tion of surplus affective labour – the quintessential gréve humaine – that presents a contemporary post-political dilemma of life in excess.

[1] “The lying down game: how to play” The Telegraph 09 Sep 2009
Posted by Sumugan
Email ThisBlogThis!Share to TwitterShare to FacebookShare to Pinterest
Labels: Acton Beale, das superpaper, necro-economics, Planking