A collective inquiry into our present through various proposals 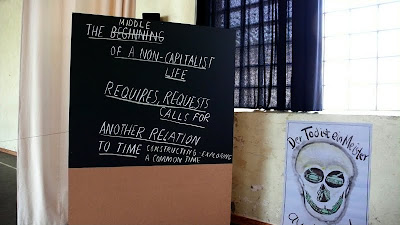 “You are worse than capitalism!” was an insult leveled at me during a recent visit to Kassel. Indeed, the overarching effects of global capitalism have occupied the minds of numerous critical thinkers over recent years, as reflected in the welcome statement of dOCUMENTA (13) curator Carolyn Christov-Bakargiev:


dOCUMENTA (13) is driven by a holistic and non-logocentric vision that is skeptical of the persisting belief in economic growth. [1]

If the first documenta in 1955 was a cultural project aimed at re-aligning Germany to liberal democratic values after the period of National Socialism, this 13th documenta may well be concerned with the re-aligning the overdeveloped world to the concerns of the globalised during a period of neoliberal postnationalism.

The small contingent of Occupy protestors that set up camp in front of the iconic Fridericianum museum during the opening week has swelled since the closure of the Berlin Biennale in which they were officially included. Having been much discussed across d(13)'s program of talks and seminars, the movement was officially welcomed by Christov-Bakargiev (garnering the nickname dOCCUPY) and entered into documenta's process of historicisation, aligned with “the spirit of the moment and the spirit of Joseph Beuys”. [2]

Although autonomous in ideology, it is understood that art events of this scale are reliant on major corporate sponsors that must be handled diplomatically, as a quick browse of any d(13) promotional material will confirm. More problematic is the claim of local activists that Kassel remains one of the largest arms and weapons manufacturers in Germany. [3] This industry led Kassel to be a key target for bombing campaigns during the Second World War which left the city in ruins, and ironically shaped the conditions that prompted the first documenta as a cultural rebuilding exercise.

Such is the circuitous nature of contemporary life that even those that oppose corporate greed and the industrialised war economy are effectively sanctioned by the very institutions they are critiquing, absorbed into the boundless new spirit of capitalism. So, how do you stage a critique of neoliberal values from a position of complicity?


AND AND AND are an initiative of the artists Ayreen Anastas and Rene Gabri, founders of the 16 Beaver group in New York, in collaboration with d(13)’s Chus Martínez and its Maybe education and public program. During d(13) the collective are interrogating the connections between the art event, the political economy and its local context, and in doing so perform a self-critique within the organising body and its constituent subjectivities.

Based in a former gymnasium at the periphery of the d(13) geography, their Turnhalle location serves as a workshop, meeting room, kitchen and dining hall where the collective hosts talks, screenings and unworkshops according to a series of thematics that have so far included “Capitalism out of the body”, “The politics of small groups”, “Five decolonial days”, and “An anti-capitalist approach to noise and improvisation” as well as a week of anti-university teach-ins.

Collaborating with local students, activists and food producers, the collective operates a cart serving tea made from herbs cultivated in the courtyard of the Ottoneum, Kassel’s natural history museum. They also arrange a food kiosk in the expansive city gardens, Karlsaue park, selling a variety of locally sourced fruits, vegetables, boiled eggs, sandwiches and pastries, that is also the site of a Sunday morning conversation series relating to food and ecology.

As an open-to-all project of activities addressing local concerns via the process of 'commoning', AND AND AND are awkwardly positioned in relation to the organisation from which they emerge. The Turnhalle, Tea Garden, and Food Kiosk are all accessible without the entry ticket required for the other d(13) exhibitions. Their internal programming draws from d(13) participants as well as others not included, extending the scope and reach of the official program, connecting local concerns to a global network of affiliates.

At the opposite end of the spectrum the artist Gareth Moore pursues an obscure and isolationist alternative to AND AND AND's accessible collectivity. Moore's installation, a place – near the buried canal, is located in the maintenance area at the far end of Karlsaue Park. The site, although listed on the d(13) map, is difficult to find, partly due to the artist having removed its identifying peg.

Moore has lived on site since early 2010 and over that time built a small self-sufficient compound from scavenged and discarded material. Besides the cabin in which he lives, the artist has assembled an inter-spiritual temple, a kiosk selling sodas and incense, a Museum to the Rhinoceros Clara of Infinite Orange Rinds, a healing centre and a small pensione in which guests can stay. (Moore's artist page in the d(13) guidebook is a typewriter set advertisement which includes a cut-out coupon good for one free “Hot shower OR Coffee OR Morning Whiskey OR Beans on toast” valid with accommodation.)

Built with ingenuity and attention to detail, the work affects an outsider enthusiasm making it a word-of-mouth must see. Fenced off behind a small thatch of forest it operates to Moore's own visiting hours and requires a single coin entry fee (all coins are accepted), regardless of a d(13) ticket. Visitors are discouraged from straying from a tightly controlled planked walkway and cameras must be checked at the gate, swapped for a small chestnut on a string.

Whilst it might not be a direct critique of institutional entanglements with neoliberal capitalism, a place... does showcase a self-determined lifestyle and an unorthodox craftsmanship that unfolds as a surprising and delightful series of affective intensities.

Given the unstoppable advance of capitalism unbound, could it be that these documenta enabled pockets of irreality hint at a cure yet to come?