In the context of Covid, “contact” corresponds to a contagion that is airborne and alludes to anxieties about sharing space and breathing the same air. Music also travels through air, and the ethnomusicologist Steven Feld claims that sound is a haptic sensation as changes in air pressure vibrate our eardrums. Indeed, music has long been mediatized and distributed in such a way that we are often “touched” by recorded or broadcast sounds, but there are other aspects of music performance that forge sonic cultures and aesthetics. The burgeoning philosophy of somaesthetics proposes that our bodies are an indispensable “tool of tools” and so by enhancing our bodily perceptions we may improve our quality of life. In my early attempts to write about dance, I was advised that rather than trying to “read” the performers’ movements I should attend to how they registered in my body; how did they make me feel? So while I consider how music affects me as an audience member, I am also keen to emphasize how audiences are receptors and, indeed, hosts for sounds. In particular, I was struck by the range of singing practices represented at this year’s festival. 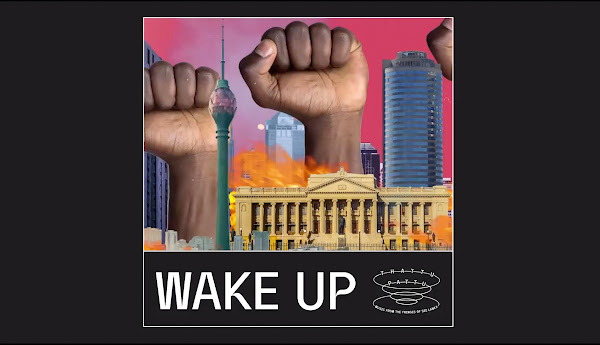 By the time you read this Wake Up will be history. The track was written and recorded in January 2022 and the video finished in March, yet it predicted the political-economic crisis that struck in April. “The Sri Lankan Spring”, some call it, recalling the peoples’ movements in Tunisia and Egypt that gave rise to the Arab Spring and the Occupy movements in 2011–12. So now the music video arrives to you late, but nevertheless timely. Having pre-processed the crises and the protests currently in play, Wake Up’s montage possesses some visionary power. Rendered with film grain, dust and scratches it emerges as already archival. Might it serve as a kind of divinatory tool? What does it reveal?

OJ Da Tamil Rapper has been something of an enigma, hiding out in the hilltops of Nuwara Eliya where he tends to a farm. Bo Sedkid, the producer alias of artist and filmmaker Muvindu Binoy, is a versatile musician, known as a beatmaker and more recently as a singer-songwriter.