Lights up to the sound of dogs barking in the distance. Four figures sit stage right in a circle, handling a tangle of fluorescent yellow rope. From between their dextrous fingers emerges a headpiece, a cushion, a noose… They are three women of colour and a tall, lanky, bald white male. Later in the foyer my friend, a white Colombian who tells me she experienced racism as a Latinx for the first time when she studied in the US, commented that ‘the casting is definitely not colour-blind.’

The performers wear short-legged playsuits made of blue denim, a material associated with workers and the working class. It could be read as infantilising. Also, all four performers sport gold grills.

There are different ‘movements’ or configurations to the one act piece. For example, three dance together as a troupe with one hidden beneath a bundle of ropes. The tall male performer braces a Black woman upside down against his body and they dance together awkwardly. He dances solo like the trance-ritual performers captured in Jean Rouch’s Les Maîtres Fous (1955). Towards the end all four dance together in a row. Scrawling in my notebook in the dark I can later make out the words: cartoon, caricature, Gummo, Coolie dance.

White Dog, white gaze
In the discussion with Grada Kilomba following the performance billed to be about cultural appropriation, Laâbissi explains through a translator that White Dog concerns four individuals who want to build a work together. They work on knots and unraveling those knots together and thus build consensus ‘in a debate together’. Thus, it is not a work about universality but pluriversality.

White Dog is performed in a striking set designed by Nadia Lauro that evokes a jungle setting, with trees and vines made of ropes.‘Our bodies are enforested, they are part of the forest…our bodies are like branches,’ says Laâbissi. The piece was inspired by a conversation with Dénètem Touam Bona, author of Fugitif, où cours-tu? (Fugitive, where are you going?) (2016), which recounts runaway slave narratives. Its thematics are about ‘marooning’; escape, fleeing, withdrawal. Yet the French-born artist with a Moroccan heritage, insists that the work is not representative of any particular group. Rather she states that her main concern is about the artist as a singularity—‘a dialectic between me and me’.

A comment from the audience concerned how White Dog seems to reproduce clichés about Black bodies and perhaps even reinforces racist stereotypes, particularly to do with primitivism. One could argue that the work challenges audiences to read their reactions and reception of the images it evokes, which are also inscribed in history and (colonial) systems of knowledge. Laâbissi confirmed that the piece does indeed take ‘a deep dive into these stereotypes’ and is busy with unknotting these complications. She admitted that the dancing is very permissive. As an artist heavily criticised for her use of Native American signifiers in her solo piece, Self-portrait: Camouflage (2005) Laâbissi was emphatic that she does not do censorship.

Epistemic violence
Grada Kilomba spoke of artists’ responsibility to deliver a language that goes beyond the reproduction of racist and gendered stereotypes, their associated forms of epistemic violence and modes of ‘cultural appropriation today.’

She claimed that a lot is expected of artists of colour, and noted how many of us pursue hybridity so as not to respond to what is expected of us; to represent a certain group of people or issue. Kilomba spoke of trends in contemporary art by which institutions seek out such artists who move beyond colonial narratives. While she has benefited from such interests, she admits to it being problematic given that certain artists are effectively recruited to play a role in institutional discourses. This gives rise to a situation that she describes as ‘inclusion within exclusion and raises questions about who gets funded and ultimately gets to produce new knowledge. It also worth noting who accesses these spaces; are there many people of colour?

Kilomba outlines artist strategies to subvert these machinations. For example, Kilomba who is based in Berlin is represented by Goodman Gallery in Capetown and Johannesburg. So when European institutions want to show her work in Europe, they still have to go via South Africa. Later at the bar she talked about the strategies adopted by some of her peers who set conditions about how and where their work is shown, often insisting that the interested gallery also exhibits an accompanying piece or the work of a fellow artist.

Fortress Europe
Trained in psychoanalysis and also an author and theorist, Kilomba is critical of how discussions about race and colonialism in Europe are often presented as an ‘intellectual choice’; often as part of discourse or a curriculum to be pursued as part of one’s career. In such instances the experiences of the racialised and colonised are commodified as ‘knowledge’ of which one can gain expertise without lived experience or committing to transformative decolonising work. Kilomba, whose practice is anchored in her biography and subjective experience, argues that Europe is yet to understand how these histories are ‘inscribed in the skin of our bodies and biographies’ and indeed society.

In light of this discussion, White Dog might be understood as a thoughtful provocation that makes time for contemplating historic and ongoing processes of racialisation and the ways they are reinforced through the ways we have learned to look and make associations. It evokes a desire to flee from such a world, but this  is near impossible and there is still much work to do. 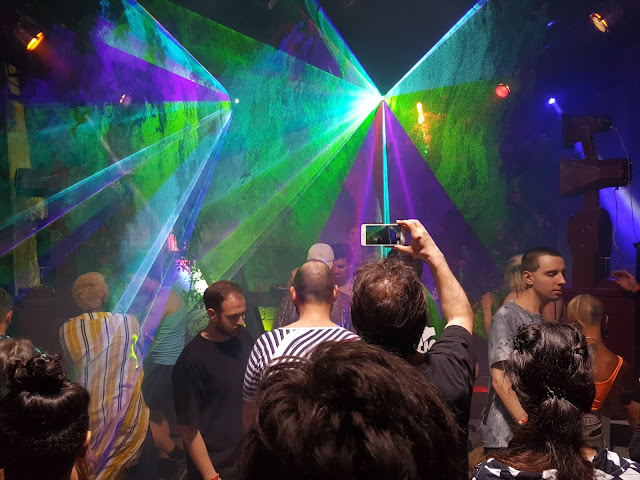 ‘The Nature Loves Courage Festival in Sougia, Greece was founded by DJ Abyss X. Through its foregrounding of female-identifying, queer and non-binary artists, as well as its commitment to a diversity of styles, the festival contributes to the development of what is known as post-club culture. What can this festival tell us about today's post-internet club scene?’