A Merry Life and a Short One

European expansions ensured that the world as we know it was logged, charted and administered by the time the 20th century rolled around. Later developments in satellite and communication technologies added more layers of data to these geopolitical schemas, and more recently Google Maps has ensured that anyone with internet access can have unprecedented detail of regions otherwise unknown via its ‘Street View’ and ‘Satellite’ functions. Given the ideology of transparency and accessibility that marked early net culture, it’s ironic (although not unexpected) that now the only blank spaces on the map are the sensitive military and government zones blurred by Google[1]. For most of us it appears life beyond the scope of Google is but a fantasy of the last century.

The high seas have long been active zones for radical thinking. In another era ideas of self–empowerment and stories of revolution were carried by seamen across colonial shipping routes. Around the world dockland communities harboured progressive mixed race movements that campaigned for labour reform and citizenship. Recent scholarship suggests that during the short lived but long mythologised ‘golden age of piracy’(roughly 1690-1725) some crews sailed under Articles of an unprecedented egalitarian nature that were often preferable to the terms of more legitimate ventures [3].

Jump to the present where the much publicised trials and tribulations of the file sharing site The Pirate Bay, as well as the more spectacular cause célèbre Wikileaks, has foregrounded the difficulty of (and keen opposition to) policing data flows and intellectual property. As authorities scramble to pin a charge on Wikileaks spokesperson Julian Assange it seems inevitable that the alleged US army source Bradley Manning will feel the full weight of the law to serve as warning to all potential ideologues that radical urges acted upon, however historically effective, are sure to be crushed.

The Erased Adjuncts of retrieved propaganda prints recall past ideologies, territories and power blocs. McLean’s selections of phrases and symbols are suggestive but never explicit glyphs of an earlier era that are altered, appropriated or simply re-presented.

Amidst all this T.A.Z. talk and nineties net nostalgia, I can’t help but add an adjunct of my own – a mental picture of Squatspace Sydney at the onset of the last decade. At the height of their public battle against developers and the council the words “Brief Utopia” appeared, painted in large letters high up on its Broadway face. Lasting for some time after the squatters were evicted it served as a reminder – an ideological trace – as well as an echo of an earlier potent era. For High Seas I’ll indulge in retrieving another, more appropriate phrase from the past: Sous les paves, la plage. 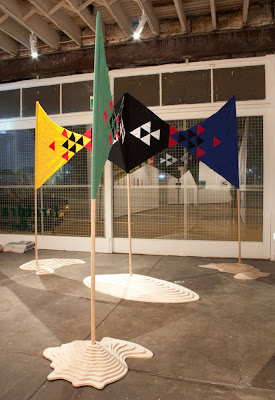