Crimes of praxis: documentary and friction 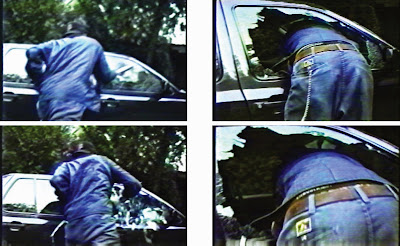 The universally popular sport of mocking authority has a distinct place in Mexican cultural life, a nation where blatantly corrupt civic institutions are penetrated by organized crime.

In 1997 the Mexican artist Yoshua Okón and, quite literally, his partner in crime Miguel Calderón set the bar for anti–authoritarian art mischief with A Propósitio… (1997). A work comprised of a guerilla style video documenting Calderón stealing a car stereo is projected large behind a wall of 120 car stereos, also stolen, that the pair had acquired on the black market.

Upping the ante, Joaquin Segura produced Someone Else’s Doc Martens (2002), a hasty hand held video in which Segura and his friends mug a stranger for a pair of boots identical to those worn by the artist. An accompanying action shot in glimmering night vision as the video ‘Hangover’ (2003), documents Segura cracking a just–drunk bottle of wine over the head of an unsuspecting passerby before bolting, cursing towards the camera.

Regardless of whether you consider these actions to be real or staged, here in the Distrito Federal they are plausible – performances of the kinds of random street crime that punctuate everyday life in one of the world’s most populated cities.

These ‘documentary frictions’ of mediated violence flow along the course of global capital as artists from these ‘Third World’ margins appear more prominently in the contemporary art field. These works transform the frictions that arise from economic inequalities, policy failures, and population displacements into cultural commodities, that might also trade on an ‘Economy of Fear’.

Mexico has a supply chain of sanguine imagery, from Aztec rituals, a bloody Revolution and the more recent ‘War on Drugs’, that are ubiquitous in public culture. An analysis of the kinds of torture at play in the current ‘Narco Wars’ notes similarities to techniques used by the Spaniards during the Inquisition[1], suggesting that deeply imbedded colonial violence continues to be re–played in contemporary society.

Drawing closer to home, a recent work by Vernon Ah Kee also uses the documentary form to comment on an ongoing perversion of civic powers. Tall Man (2010) concerns the figure of Lex Wotton and the violent community uprising in Palm Island 2004 that was a consequence of the death in custody of Cameron ‘Mulrunji’ Doomagdee. Doomagdee died after an ‘accidental fall’ with the arresting officer, Chris Hurley, broke four of his ribs and ruptured his liver and spleen.

Wotton was charged with inciting a riot in 2008 and handed a seven–year gaol sentence. Hurley, however, received a medal, a promotion and was re–located to the Queensland Gold Coast. Admittedly, I am yet to see this work, but I am very familiar with some of its source material – a video of the events used to prosecute Wotton. By remixing this evidence it’s possible Ah Kee performs a cultural re–balancing, where Wotton[2] emerges as the anti–authoritarian hero he is considered by many – and not only Palm Islanders – for “standing tall”[3] against the continued re–enactment of colonial violence.